Brazilian Butt Lifts restore volume to deflated buttocks. It is a specific use of Fat Grafting performed for individuals born with skinny butts, but who have a little extra fat somewhere else that can be transplanted. Sometimes this is performed following major weight loss, or after Bariatric Surgery, but often the procedure is used to distribute fat in a more proportionate and shapely way. A Brazilian Butt Lift adds volume and lifts loose buttocks skin via Buttocks Fat Grafting.

Brazilian Butt Lift (Buttocks Fat Grafting) Before and After Photos 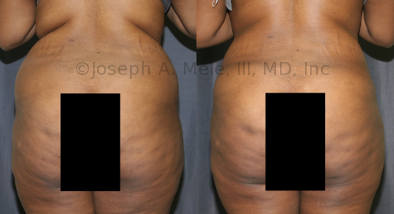 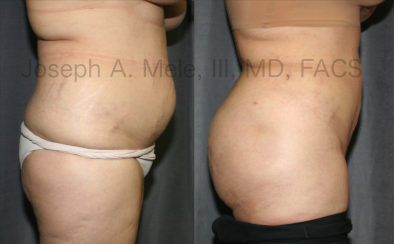 Fat Grafting to the Buttocks

Who is a Good Candidate for the Brazilian Butt Lift?

In order to be a candidate for Fat Grafting, you need to have a little extra fat elsewhere to borrow. If you are skinny everywhere, this is not the procedure for you. The Brazilian Butt Lift involves a combination of Liposuction and Fat Grafting to reshape the buttocks. If you have extra fat on your abdomen, flanks, back or thighs, the disproportionate fat from these areas is removed and cleaned. The fat cells (adipocytes) are then carefully transplanted into the buttocks to round them out. Curves can be augmented and depressions can be filled. Unlike an implant, the volume of fat can be injected selectively as needed throughout the buttocks.

The nice thing about Fat Grafting is its ability to augment specific areas; however, there are limitations to Fat Grafting to the Buttocks, also. The biggest problem is having enough fat. The fat has to be your own, and some volume is lost during Liposuction and while preparing the fat for grafting. Fat cells need to be harvested intact in order to survive, so areas that have previously had liposuction are often not good donor sites. Some volume can also be lost after transplanting. The buttocks is one of the easiest areas to fat graft. The buttocks have a good blood supply and thick skin. This helps with graft take. The more graft that takes, the bigger the buttocks’ volume. Sometimes, a noticeable percentage of the fat is lost, and re-grafting may be needed. Most of the time the fat cells take well and remain full and soft, Rarely, however, the “lost” fat cells become hard, causing lumps in the buttocks. Unpredictability in the amount of fat available, and the amount of fat that takes, are the main limitations of Fat Grafting.

Alternatives to the Brazilian Butt Lift are Buttocks Fillers and Buttocks Implants. There are no FDA approved Buttocks Fillers. Buttock Injections with Silicone and PMMA have been used, often with disastrous results. The products are permanent, and often become hard and lumpy over time. They cannot be removed without causing disfigurement of the buttocks. Bargain basement practitioners have used everything from paraffin to fix-a-flat, causing disfigurement and death, so buyer beware. Anyone who comes to your house, or does the procedure in a hotel, is likely unqualified and unsafe. Gluteal Implants are not FDA approved, but seem to be safer than fillers. Dr. Joseph Mele feels Gluteal Implants often end up riding up too high on the buttocks, and often give an odd shape, so he currently does not perform buttocks augmentation with gluteal implants. If you are considering Buttocks Implants, be aware the procedure is not performed often.

Dr. Mele is an Active Member of the American Society of Bariatric Plastic Surgery, Board Certified Plastic Surgeons dedicated to reshaping bodies after massive weight loss.

Dr. Mele has extensive experience helping patients after massive weight loss. Whether after Bariatric Surgery, or due to changes in diet and exercise, large amounts of weight loss often lead to large amounts of loose skin. Dr. Mele prides himself on helping his patients look and feel better in their skin.

After large weight loss the buttocks often appear deflated and saggy, and there is often not enough fat left for grafting. Dr. Joseph Mele often performs a skin excision type of Buttock Lift in these cases, often as part of a circumferential Lower body Lift or Belt Lipectomy.

Call (925) 943-6353 to contact our practice, or to schedule a consultation to learn more about your buttocks shaping options. If you are in good health, but frustrated with buttocks skin laxity, or small buttocks, and have a little extra fat to borrow, a Brazilian Butt Lift is an option worth exploring.